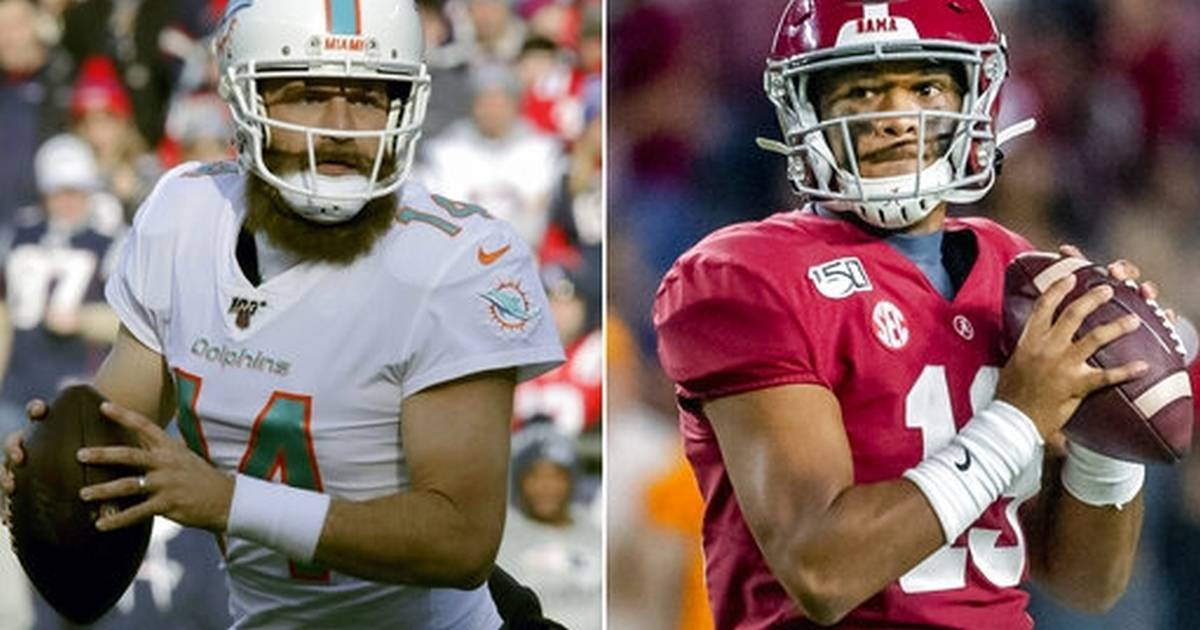 MIAMI — Ryan Fitzpatrick says he has talked with rookie Tua Tagovailoa about the most anticipated handoff in years for the Miami Dolphins.

It will happen when Fitzpatrick gives up the starting job at quarterback. And he’s aware that day is coming.

‘œI don’t know how much time it will be before Tua is in the lineup,’� Fitzpatrick said Saturday. ‘œI know I am the placeholder, and we’ve already had that conversation. I’m going to do the best I can to lead this team and to win when I’m out there. Whenever Tua gets his chance, I’m going to be his biggest cheerleader.’�

That attitude makes the 37-year-old Fitzpatrick an ideal caretaker as the Dolphins groom Tagovailoa to become their franchise quarterback.

Tagovailoa was in grade school when Fitzpatrick broke into the NFL, but the two QBs nonetheless hit it off.

‘œEven though I’m an old geezer to him, we’ve meshed personality-wise, and I’m excited to work with him,’� said Fitzpatrick, who embraces the role of mentoring young players.

‘œI’m going to go out there and compete every single day, as I know the younger guys are. But in the meeting rooms I’m not going to keep anything to myself. I’m going to share as much as I can.’�

Tagovailoa, coming back from a serious hip injury that ended his Alabama career in November, was the No. 5 choice in the April draft. For the rebuilding Dolphins, the pick is a huge investment: the highest they’ve used to draft a quarterback since taking Bob Griese in 1967.

The Dolphins won’t start practice until mid-August, but so far Fitzpatrick gives Tagovailoa a thumbs-up.

‘œHe’s a really interesting guy,’� Fitzpatrick said. ‘œHe has a lot of energy to him, and you can just tell guys are going to gravitate to him. I can already tell he is going to be one of those guys that gets along with everybody, and that guys are going to want to follow. He just has that air about him. There’s not a whole lot of ego involved, and he is very likable.’�