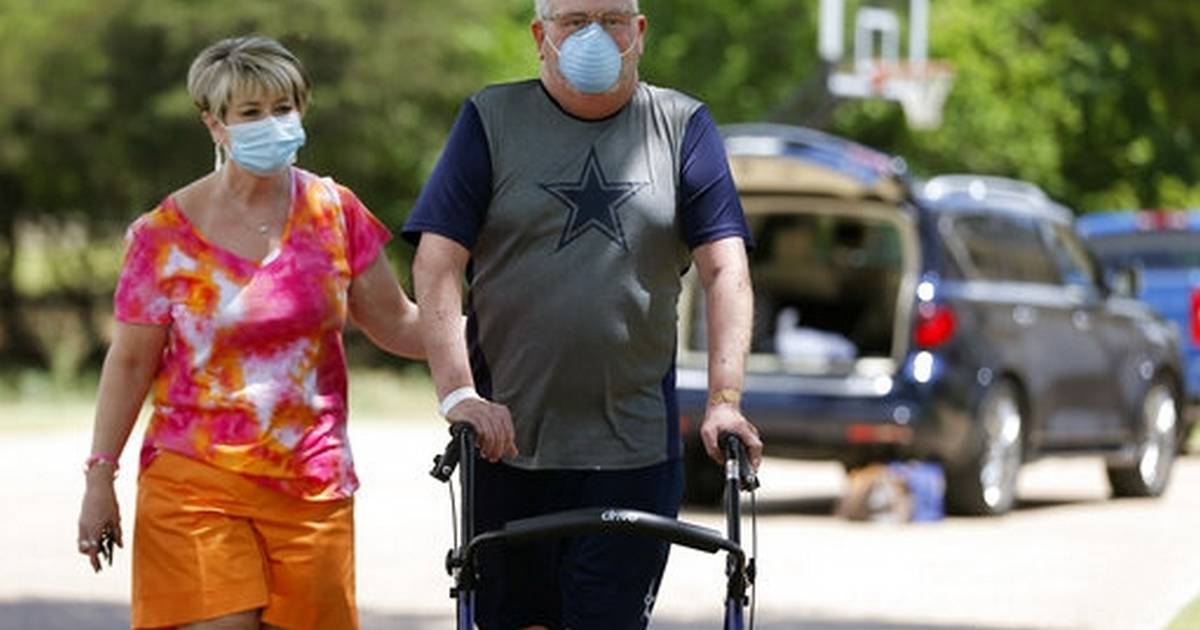 Amid the chaos of the pandemic’s early days, doctors who faced the first coronavirus onslaught reached across oceans and language barriers in an unprecedented effort to advise colleagues trying to save lives in the dark.

With no playbook to follow and no time to wait for research, YouTube videos describing autopsy findings and X-rays swapped on Twitter and WhatsApp spontaneously filled the gap.

When Stephen Donelson arrived at the University of Texas Southwestern Medical Center in mid-March, Dr. Kristina Goff was among those who turned to what she called ‘œthe stories out of other places that were hit before.’�

Donelson’s family hadn’t left the house in two weeks after COVID-19 started spreading in Texas, hoping to shield the organ transplant recipient. Yet one night, his wife found him barely breathing, his skin turning blue, and called 911.

In New York or Italy, where hospitals were overflowing, Goff thinks Donelson wouldn’t even have qualified for a then-precious ventilator. But in Dallas, ‘œwe pretty much threw everything we could at him,’� she said.

Like doctors everywhere, Goff was at the beginning of a huge and daunting learning curve.

‘œIt’s a tsunami. Something that if you don’t experience it directly, you can’t understand,’� Italian Dr. Pier Giorgio Villani said in a series of webinars on six straight Tuesday evenings to alert other intensive care units what to expect. They started just two weeks after Italy’s first hospitalized patient arrived in his ICU, and 10 days before Donelson fell ill in Texas.

Villani, who works in the northern city of Lodi, described a battle to accommodate the constant flow of people needing breathing tubes. ‘œWe had 10, 12, 15 patients to intubate and an ICU with seven patients already intubated,’� he said.

The video sessions, organized by an Italian association of ICUs, GiViTI, and the non-profit Mario Negri Institute and later posted on YouTube, constitute an oral history of Italy’s outbreak as it unfolded, narrated by the first doctors in Europe to fight the coronavirus.

Italian friends spread the word to doctors abroad and translations began for colleagues in Spain, France, Russia and the U.S., all bracing their own ICUs for a flood of patients.

They offered ‘œa privileged window into the future,’� said Dr. Diego Casali of Cedars-Sinai Medical Center in Los Angeles, who is from northern Italy and was directed to the webinars when he sought advice from a front-line friend about how to prepare.

Dr. Jane Muret of the French Society of Anesthesia-Resuscitation also heard by word-of-mouth and, impressed by the breathing-tube lessons, posted a translation when France had only a handful of diagnosed COVID-19 cases.

‘œNow we can recognize our COVID patients’� when they start showing up, she said.

Every tidbit about the newest baffling symptom, every trick to try, served as clues as the virus bore down on the next city, the next country. By the time Donelson arrived, Goff’s hospital was adjusting ventilator care based on that early advice.

But while grateful for the global swirl of information, Goff also struggled to make sense of conflicting experiences.

‘œYou have no idea how to interpret what went right or what went wrong,’� she said, ‘œor was it just the native course of the disease?’�

Even now, months into a pandemic first wave that’s more like constantly shifting tides, Goff is humbled at how difficult it remains to predict who will live and who will die. She can’t explain why Donelson, finally home after a 90-day ordeal, was ultimately one of the lucky ones.

Doctors in Italy were confused: Reports from China were suggesting a death rate of about 3% among those infected. But for the first 18 days, only the dead left the ICU at Bergamo’s large Pope John XXIII Hospital.

While the toll eventually dropped, 30% of the hospital’s initial 510 COVID-19 patients died.

After decades in practice, ICU chief Dr. Luca Lorini thought he knew how to treat the dangerous kind of respiratory failure — called ARDS, or acute respiratory distress syndrome — first thought to be the main threat.

‘œEvery night, I would go home and I had the doubt that I had gotten something wrong,’� Lorini said. ‘œTry to imagine: I am all alone and I can’t compare it with France because the virus wasn’t there, or Spain or the U.K. or America, or with anyone who is closer to me than China.’�

Only later would it become clear that for patients sick enough to need the ICU, death rates were indeed staggeringly high.

By February, China had filed only a limited number of medical journal reports on how patients were faring. Lorini’s hospital tried to fill the data gap by dividing patients into small groups to receive different forms of supportive care and comparing them every three or four days — not a scientific study, but some real-time information to share.

The first lessons: The coronavirus wasn’t causing typical ARDS, and patients consequently needed gentler ventilation than normal. They also needed to stay on those ventilators far longer than usual.

Then mid-March brought another startling surprise: In a training video for U.S. cardiologists, Chinese doctors warned that the virus causes dangerous blood clots, and not just in the lungs.

Dr. Bin Cao of the China-Japan Friendship Hospital in Beijing explained that as the virus sneaks past the lungs into the bloodstream, it damages the lining of blood vessels, forming clots in the heart, kidneys, ‘œall over the body.’� He urged American doctors to use blood thinners protectively in the severely ill.

In Italy’s epicenter, doctors were making the same discovery. Lorini described a scramble to get the word out via Skype and email. ‘œThis is a vascular sickness more than a pulmonary one and we didn’t know that,’� he said.

In the U.S., the finding about blood thinners made biological sense to Dr. Tiffany Osborn, a critical care physician at Washington University School of Medicine in St. Louis.

‘œIt means at least you’re not shooting in the dark. You’re trying something that from a physiologic standpoint makes sense,’� said Osborn, who was living in a camper in her driveway to avoid bringing the virus home to her family after her long ICU shifts.

By April, many doctors were bowing to pressure to try a malaria drug named hydroxychloroquine that obsessed President Donald Trump. Osborn never understood why such a drug would work and, sure enough, it eventually failed when put to a real test.

‘œWe’re learning as we go,’� Osborn said. ‘œYou could talk to me in two weeks and I might be telling you something that’s really different.’�

When Stephen Donelson arrived in the emergency room, ‘œwe had very little hope for him,’� Goff said.

The Midlothian man had undergone an organ transplant two years earlier, and the immune-suppressing drugs that prevent rejection of his new lungs and liver meant his body couldn’t fight the coronavirus. Goff’s first challenge: how to scale back those medicines just enough for Donelson to battle the virus without endangering his transplant.

Her second: He was fighting against the ventilator’s artificial breaths. So Goff deeply sedated Donelson, paralyzing his muscles to let the machine do all the work.

Hospital after hospital struggled with balancing how to get enough air into oxygen-starved coronavirus patients without further damaging fragile lungs.

Ventilation is like ‘œblowing air into a sponge and all the little holes are opening up. Walls between the holes can be very thin. If you’re putting in a lot of air, it can damage the lining of those little holes,’� explained Osborn, the St. Louis critical care specialist.

A trick the doctors shared with each other: Flip patients over from their backs to their stomachs – a procedure called proning that takes pressure off the lungs, which lie closer to the back. It also helps lower fluid accumulation in the lungs.

It’s not a one-time fix. Donelson stayed on his belly about 16 hours a day early on, as his doctors watched his oxygen levels improve. It’s also hot and heavy work: Every turn took five or six health workers, in full safety garb, working in slow synchrony to avoid dislodging his breathing tube.

Italy’s Alessandro Manzoni Hospital set a schedule: Start turning patients onto their bellies at 2 p.m. — it took more than three hours to work through them all — and then put them on their backs again at 8 a.m., when fresh nurses arrived.

Hospitals that specialize in treating ARDS knew how to prone before COVID-19 hit. For many others, it was a brand-new skill their workers had to learn. Fast.

‘œWe’ve never had to prone anyone here before the pandemic, but now it’s like second nature,’� Kevin Cole, a respiratory therapist at Fort Washington Medical Center in Maryland, said four months into the U.S. outbreak.

And some hospitals now are asking patients not yet on ventilators to simply roll over periodically, in hopes it might prevent them from needing more invasive care.

‘œWhat have we got to lose? That’s something that’s not going to hurt anybody,’� Osborn said.

Even in normal times, critical-care specialists know they can’t save all their patients. But they’re used to more hand-holding. With this virus, even garbed in spacesuit-like protective gear, health workers must minimize time with infectious patients to avoid getting sick themselves. And family members are largely barred, too.

‘œMy general way of doing things is, no one dies alone,’� said Osborn, who holds her phone in front of dying patients so loved ones can say goodbye.

She paused to compose herself, and added: ‘œIf this is going to happen, and you can provide some comfort that maybe they wouldn’t have gotten if you weren’t there, that’s important.’�

The newest lesson: Recovery takes a lot longer than surviving.

Back in Dallas, Donelson spent 17 days on a ventilator. When it was removed, he was too weak to even sit without support and the breathing tube had taken away his ability to swallow.

‘œHe would try to pick his head up off the pillow and it would lob to the side just like a newborn baby,’� said his wife, Terri Donelson, who for the first time since his hospital admission finally was allowed to connect with her husband through a videoconferencing app.

For days after waking up, Donelson had tremendous delirium, a dangerous state of mental confusion and agitation. He didn’t know where he was or why, and would try to pull out his IV tubes. Then a bacterial infection hit his lungs.

Then one morning, worried that Donelson suddenly was too quiet, his doctor donned what she calls her ‘œfull-helmet, Darth Vader-style mask, which cannot possibly help anyone’s delirium,’� and went in to check on him.

‘œI rubbed his arm,’� Goff recalled, asking him to wake up. ‘œI said, ‘˜Hey are you OK, are you with me?”� and Donelson started trying to talk, at first too raspy to understand.

Eventually, she made out that he was wishing her a happy Easter. She can only guess he heard the date on TV.

Doctor and patient cried together.

Terri Donelson countered the long periods of isolation by keeping the video app running non-stop, talking to her husband and giving him quizzes to stimulate his memory.

‘œLittle by little, with each day, he gains something new, something else reawakens,’� she said.

Finally, on June 19, 90 days after the frantic ambulance ride, Donelson – still weak but recovering – went home. His doctor is humbled by his survival, and anxiously awaiting better science to help guide care as the pandemic continues.

‘œIf you have one patient who leaves a really strong impression on you, you may interpret that patient’s experience to be hallmark. Until we have large, population-based studies of actual outcomes, it’s really hard to know what’s real and what’s not real,’� Goff said.

The Associated Press Health and Science Department receives support from the Howard Hughes Medical Institute’s Department of Science Education. The AP is solely responsible for all content.