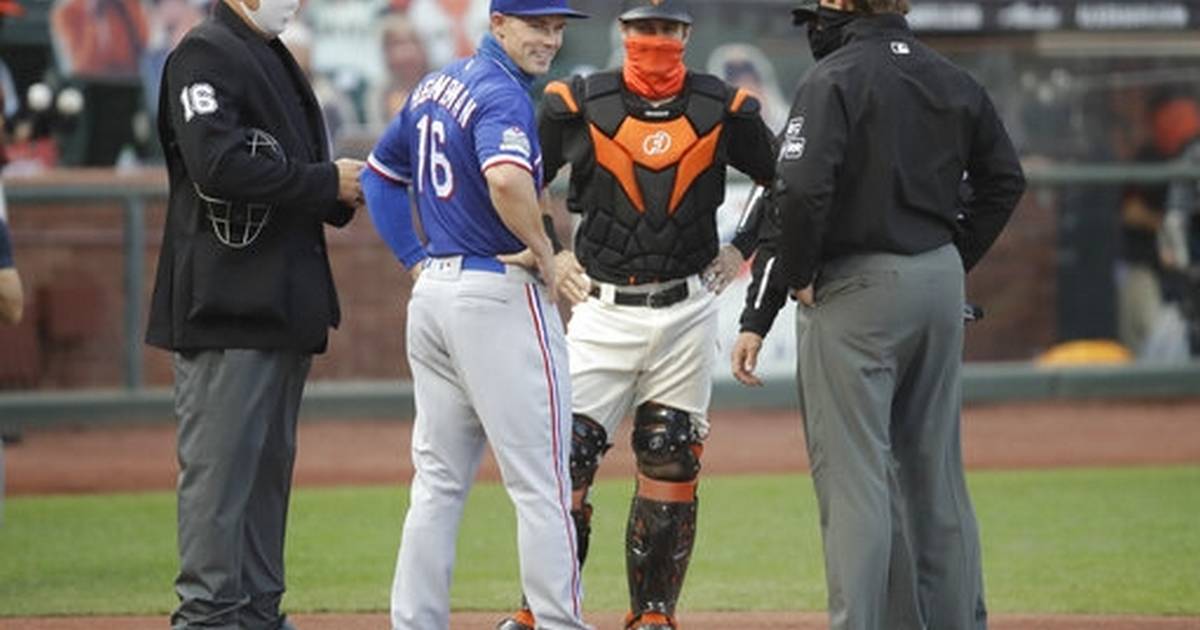 SAN FRANCISCO — Brothers Scott and Tyler Heineman walked out to home plate from opposite dugouts and represented the Rangers and Giants to confirm the lineup cards, then posed for a photo with the umpires.

Hands on hips, they could only grin. Who would have thought this might happen? Not this year in interleague, at least, when the NL West had been scheduled to face the AL Central before the coronavirus pandemic changed everything.

Their two managers chatted ahead of time about sending the Heinemans to meet before first pitch Saturday night. San Francisco beat Texas 7-3 but Tyler had to watch as Scott rounded the bases on a home run in the ninth.

What made the moment even sweeter for the close-knit siblings is Scott and Tyler each earned a start – something that might not necessarily have happened in other circumstances but worked out beautifully in this condensed 60-game season.

Scott filled in at center field for Texas in place of the ailing Danny Santana, while Giants catcher Tyler has a greater opportunity to play after Buster Posey opted out of the season to care for premature twin girls he adopted last month.

It took a bit of thoughtful planning to pull this off. Managers no longer trade lineup cards before the game as has long been tradition but rather make sure both cards match up correctly.

Woodward reached out to Giants counterpart Gabe Kapler about making this game more special for the players and their proud parents.

‘œIt’s a gesture that Woody wanted to extend,’� Kapler said. ‘œI thought it’s an awesome idea. The thing that I think is most cool about that is how his mom and dad are going to feel about that. That’s one of the things that I talked to our Heineman, to Tyler about, was how cool it is for a mother and father to see something like that, to see their kids play in a major league game.’�

The siblings couldn’t wait just to share a major league field even if they weren’t playing – but then that happened, too.

‘œWe are going to get those lineup cards unless something actually happens where a guy gets his first save or makes his major league debut,’� Scott said. ‘œLooking forward to being on the same field together, just an awesome moment to share.’�

Typically, their family members certainly would have tried to attend the game, but fans aren’t allowed in the ballpark given the spread of COVID-19.

Woodward knows the significance for the Heinemans. Tyler produced an eighth-inning double before Scott’s big swing.

‘œIt’s kind of a dream come true. I don’t have a brother but I can only imagine what that would be like to have two brothers,’� he said. ‘œ… It’s got to be a special moment. You grew up together, you’re playing whiffle ball in the backyard, you’re just messing around the whole time as baseball players. To see each other kind of grow up and become both major leaguers and fortunately they’re both starting today which makes it even more special. Hopefully our guy dominates the other.’�

The brother traded text messages when Texas arrived in the Bay Area.

‘œWe just talk about the games, how each other is doing everything like that. We are each other’s best friends,’� Scott said. ‘œObviously playing against each other now, he’s the enemy if you want to call him that. We are out here to win, he’s not my brother when he’s out on the field. We are each other’s best friends, we always like to jaw back and forth, keep it competitive, keep it fun. It’s going to be really exciting to just see him on the field.’�