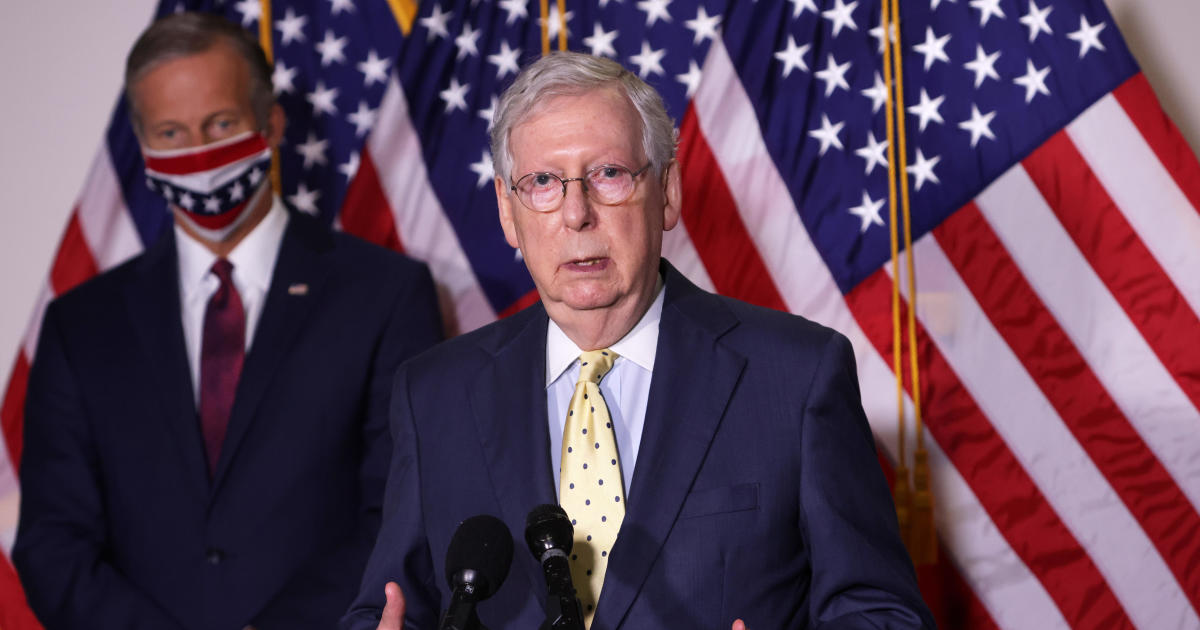 “President Trump’s nominee will receive a vote on the floor of the United States Senate,” McConnell said in a statement on Friday evening.

Multiple White House sources confirmed to CBS News Mr. Trump is expected to nominate a replacement for Ginsburg, even if he is not reelected.  He is expected to do everything he can to fill this seat and expand on his legacy of appointing conservative judges to federal courts.

In a tweet on Saturday morning, Mr. Trump said that Republicans in the Senate have an “obligation” to move forward with confirming a justice “without delay.”

“We were put in this position of power and importance to make decisions for the people who so proudly elected us, the most important of which has long been considered to be the selection of United States Supreme Court Justices. We have this obligation, without delay!” Mr. Trump wrote.

According to NPR, Ginsburg’s granddaughter Clara Spera said just days before her grandmother’s death, she said, “My most fervent wish is that I will not be replaced until a new president is installed.”

McConnell blocked the confirmation of nominee Merrick Garland to the Supreme Court after Justice Antonin Scalia died in February 2016, saying it was too close to the election to fill an empty seat on the court. Garland was nominated by President Obama, a Democrat. However, McConnell has said he would not do the same if a seat suddenly became vacant ahead of this year’s election, as President Trump would nominate a conservative justice.

In his statement on Friday, McConnell argued that it was not hypocritical to vote on a vacancy so close to the election after refusing to do so four years earlier, as the Republican Party now controls both the Senate and the White House.

“In the last midterm election before Justice Scalia’s death in 2016, Americans elected a Republican Senate majority because we pledged to check and balance the last days of a lame-duck president’s second term. We kept our promise,” McConnell said. “By contrast, Americans reelected our majority in 2016 and expanded it in 2018 because we pledged to work with President Trump and support his agenda, particularly his outstanding appointments to the federal judiciary. Once again, we will keep our promise.”

McConnell’s statement echoes what he has previously said about voting to confirm a Trump nominee for the Supreme Court in an election year. Asked at an event in 2019 if he would fill a vacancy on the Supreme Court during an election year, McConnell said, “oh, we’d fill it,” prompting laughter from the audience. McConnell repeated this sentiment in an interview with Fox News in February.

“If you’re asking me a hypothetical about whether this Republican Senate would confirm a member of the Supreme Court due to a vacancy created this year — yeah, we would fill it,” McConnell said.

Senator Lindsey Graham, the chairman of the Senate Judiciary Committee, said in May that filling a vacant Supreme Court seat before the election “would be the goal.”

“If a vacancy did occur…that you would see an effort by Republicans, I’m sure, to fill the vacancy,” Graham said. This contradicts a comment Graham made in 2018, when he said “if an opening comes in the last year of President Trump’s term, and the primary process has started, we’ll wait to the next election.”

The vacant seat has already become a campaign issue, moments after Ginsburg’s death was announced. Iowa Starting Line reported that Senator Joni Ernst’s campaign sent out an email to supporters fundraising off of the court. Ernst is considered one of the more vulnerable Republicans up for reelection this year.

Senator Kelly Loeffler of Georgia, who is also up for reelection this year, tweeted on Friday evening that Mr. Trump “has every right to pick a new justice before the election.”

“I look forward to supporting a strict constructionist who will protect the right to life & safeguard our conservative values,” Loeffler wrote.

Senator Martha McSally of Arizona, also up for reelection his year, tweeted, “This U.S. Senate should vote on President Trump’s next nominee for the U.S. Supreme Court.”

However, some Republican senators have indicated they may be uncomfortable with moving forward on confirming a justice so close to the election. Senator Lisa Murkowski said in August of this year that voting to confirm a Supreme Court justice now would present a “double standard.”

The New York Times reported Senator Susan Collins has also said she would oppose confirming a new justice so close to the election. Collins, who voted to confirm Supreme Court Justice Brett Kavanaugh, is locked in a tight race for reelection in Maine.

Senator Chuck Grassley in August equivocated on whether he would vote to fill a vacant seat, saying, “in the abstract, I would do the same thing in 2020 that I would in 2016.”

In a letter sent to his Republican colleagues obtained by CBS News, McConnell urged GOP senators to “be cautious and keep your powder dry until we return to Washington.”

“This is not the time to prematurely lock yourself into a position you may later regret,” McConnell said.

Mr. Trump is expected to nominate a replacement for Ginsburg, whose death leaves an open seat on a court where conservative justices already outnumber liberals. The president earlier this month announced his list of possible Supreme Court nominees, should he have the occasion to nominate more justices either in his current term or the next one. Those names include current judges and even senators such as Senator Ted Cruz and Senator Tom Cotton.